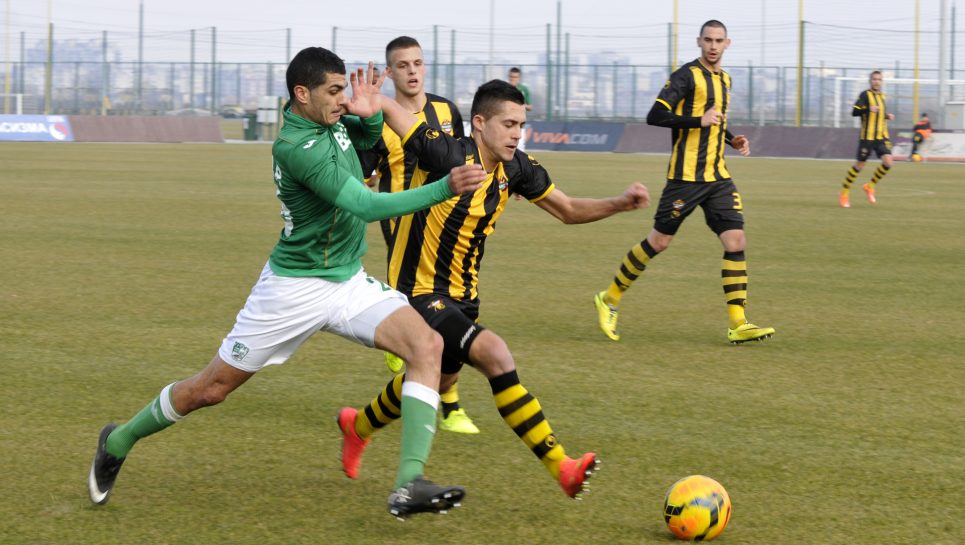 Beroe lost 1:0 to Botev Plovdiv the second tie in the winter preparation. The game was played today at the canaries campus in Plovdiv. The only goal in the match was scored by Lachezar Baltanov in the 34th minute of the game. In the first half the home team was more agressive and had more chances, while Beroe missed some very good opportunities in the second part. The match was streamed live by beroe.tv.

Lithuanian national team player Valdemar Borovskiy did not play in the game since he had to leave Beroe early this evening because of family affairs. Thus he interrupted his trial period.

Blagoy Makendzhiev started at the goal of Beroe. In the right zone of the defence Bulgaria U21 national team player Plamen Tenev was given the chance to play. Ivo Ivanov and Vladimir Zafirov were the staring central defenders, while Veselin Penev played as a left defender. Central midfield was occupied by Igor Djoman and Georgi Kostadinov, while Elias was given the position of offensive midfielder. Anton Ognyanov started as a right winger, while Salim Kerkar played in the left zone. Junior Mapuku was the forward at the start of the game.

Both teams were playing aggressively for the preparation phase in which they are currently at the start.

Salim Kerkar and Mapuku for Beroe, and Mariyan Ognynanov for Botev had their chances in the first ten minutes but did not find the net.

Between the 10th and 30th minutes the canaries had four attempts on goal by Yordan Hristov, Bozhidar Vasev, Tsvetelin Chunchukov and Lazar Marin, but keeper Makendzhiev and the luck were responsible for them missing their chances.

Lazar Marin attacked on the left wing in the 34th minute and crossed the ball in the penalty area where Lachezar Baltanov was given space and made a good shot netting the ball for 1:0.

Anton Ognyanov rund down with the ball on the left flang in the 37th minute and had a good attempt on goal, but the ball went above the net.

In the second half Beroe was playing better and had some very good chances with Salim Kerkar, Kostov and Papsys not being able to score from their respective attacks.

Atanas Zehirov made an attempt in the 71st minute but the ball went wide.

In the 73rd minute Beroe had their best chance for an equalizer. Pavel Petkov passed to Kostov who found himself at a good position for an attempt. His shot was blocked by Mihail Ivanov and the ball came directly to Chris Gadi, who tried his luck from the penalty area, but Botev’s defence managed to block the shot.

Until the end of the game Samir Ayass and Stanislav Kostov had their opportunities, but did not manage to score.

Beroe’s next opponent in the winter preseason friendlies is Svilengrad 1921 on January 26. One day after this game Beroe starts it’s camp in Alanya, Turkey. The team will play three friendlies there. The only sure opponent is Gornik Zabzre (Poland) with the game to be played on February 1.