The cup is ours!

Начало » Представителен тим » The cup is ours! 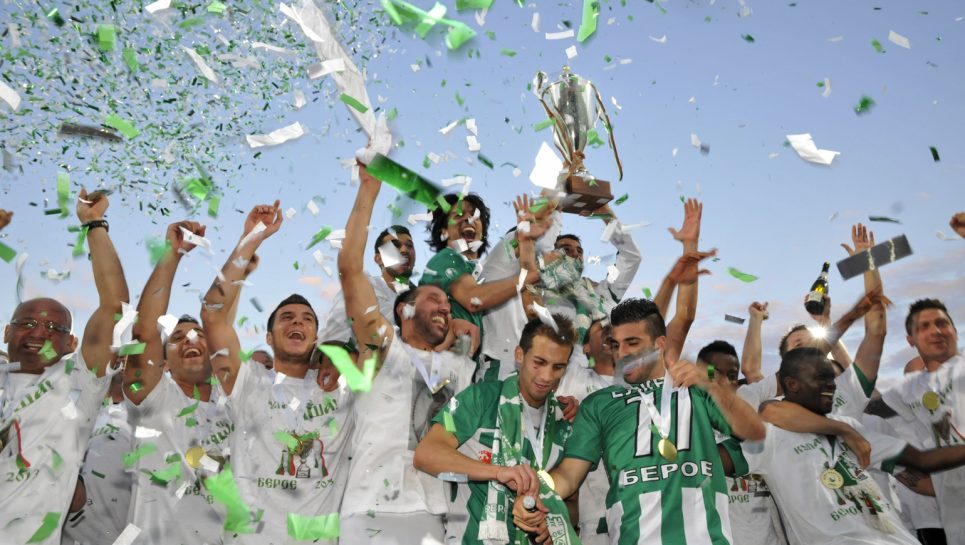 Beroe won it’s second Bulgarian cup in history. In a dramatic match which ended 3:3 in regular time and after the extra time, the victory came after penalties which Beroe won 3:1.

Levski started more concentrated in the game and had the first two chances after crosses by Iliyan Yordanov and Hristo Yovov. The defense however was very well positioned and managed to block the ball before the „blues“ got any chance to make an attempt.

The first big chance for Beroe was also the first goal of the game. In the 17th minute Veselin Penev crossed to Elio Martins, who then headed the ball from 7 meters in the goal – 1:0.

Three minutes later Stefan Velev tried his luck with a distance shot, but this got directly in the hands of goalkeeper Karadzhov.

Georgi Andonov took a free kick in the 22nd minute, but the ball was blocked by the player wall.

Two minutes later Gari Rodrgigez attacked from the right and crossed to Iliyan Yordanov, who managed to score the equalizer for 1:1 from 3 meters.

Beroe got ahead in the score once again in the 29th minute when Elio Martins got the ball from Georgi Andonov. The Portuguese then tackled Hristo Yovov and shot from the line of the penalty area past goalkeeper Iliev for 2:1.

A few minutes before the break Hristo Yovov was sent off for a second yellow card.

Plamen Krumov crossed from a corner in the last minute of the first half. The ball got to Borislav Stoychev who headed it towards goal, but Iliev saved.

Four minutes after the break Basile de Carvalho took a free kick, but shot the ball past the bar.

In the 60th minute Basile de Carvalho made another attempt from a small distance, but in the out.

Nine minutes later Cristovao Ramos crossed from free kick in the penalty area, but Ivan Karadzhov was at his spot and reacted good to block.

David Caiado took a free kick in the 76th minute. After his shot, however, the ball got directly in the hands of goalkeeper Iliev.

Three minutes later Georgi Andonov tackled Romein Eli to take the ball, then made a solo run and shot from the line of the penalty area to extend the lead to 3:1.

This unfortunately did not last long. It was only three minutes later when Gari Rodriges passed to João Silva in the penalty area. The Portuguese forward did not make a mistake from 5 meters and scored for 3:2.

Three minutes away from full time Levski managed to score an equalizer. It was Gari Rodrigez who headed the ball in the upper right corner of Karadzhov’s goal.

In the 5th minute of extra time Jerry Sitoe shot from the line of the penalty area, but the ball went past the post.

Veselin Penev crossed to Jerry Sitoe in the 108th minute, but his header was saved by Plamen Iliev.

In the last, 120th, minute João Silva found himself alone against Karadzhov, but Beroe’s goalkeeper blocked his shot to bring the game to penalties.

Beroe got the chance to take a kick from the spot first. Amir Sayoud, however, put the ball above of the net. The same was then repeated by João Silva for Levski.

Former Levski player Ivo Ivanov scored the 1:0 for, while Dustley Mulder did not find the goal for the second shot from the spot for Levski.

Plamen Krumov put the ball above of the bar at the third kick, Stefan Velev’s shot hit the bar.

In their fourth shots Beroe and Levski scored. It was Borislav Stoychev for the green-white team and Stanislav Angelov for Levski who kept their nerve.

The decider was then scored by Elias for Beroe – 3:1.