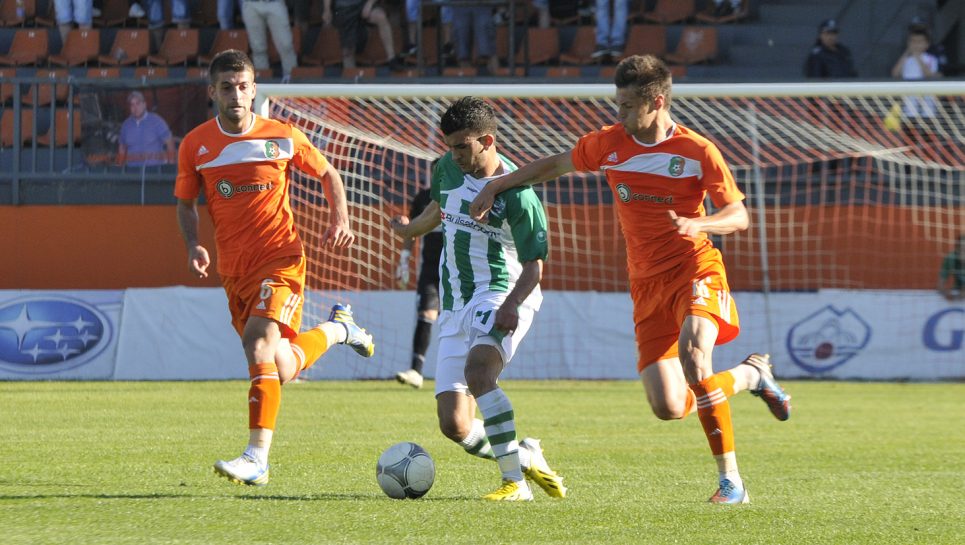 Beroe managed to score a last minute win against Litex in Lovech with 1:2. Amir Sayoud took a penalty in the 41st minute and realised for 0:1. Shortly after the break Ismail Isa scored an equalizer again from a penalty shot. Doncho Atanasow score for 1:2 in the 91st minute.

The guests started strongly in the match. Only two minutes after the whistle Amir Sayoud got a big chance to score, but Bozhikov saved.

One minute later Atanasov headed the ball, but was too imprecise.

Momchil Tsvetanov made an attempt in the 11th minute from the penalty area, but Karadzhov saved.

Twelve minutes later Martin Raynov passed to Jerry Sitoe, who entered the penalty area and shot, but the ball flew a few meters past the post.

Doncho Atanasov went to ground in the penalty area in the 41st minute and the referee decided on a penalty. Amir Sayoud stroked the ball in the lower left corner and scored for 0:1.

That lead did last through the half time break, but only one minute after the start of the second half Ismail Isa was fouled by goalkeeper Karadzhov and alone took the awarded penalty to put the ball in the same spot from where Sayoud scored.

In the 54th minute Armando Vayoushi crossed from the left flank to Kiril Despodov, who made an attempt from the penalty area but past the post.

Only ten minutes later a cross by Pedro Eugenio was headed by David Caiado, but past the crossbar.

In the 71st minute Vanger made an attempt from 25 meters, but Karadzhov was at his place and blocked in corner.

Five minutes later it was Doncho Atanasov’s turn to make an attempt, but his shot was too imprecise.

In the 82nd minute Ismail Isa got a pass alone against the keeper and tried his luck, but Karadzhov blocked with his foot. Vayushi got it, but it was Georgi Dinkov who was more alert and managed to take the ball before the Litex player got another chance to shoot.

Three minutes later Jerry Sitoe got a cross and he was at a wonderful position to score alone against goalkeeper Pirgov, but could not shoot the ball in the goal.

In the stoppage time Doncho Atanasov took a free kick and after a ricochet from Anton Nedyalkov the ball got in the net for 1:2.

Beroe’s next game is against Levski on wednesday at the same stadium for the cup final.