Beroe U13 on its way to Portugal

Начало » Представителен тим » Beroe U13 on its way to Portugal

Beroe’s U13 youth team is on the way to Portugal to take part in a tournament in Setubal. The tournament Vitoria is organized by the team with the same team. Eights teams are taking part. The games will be held between March 29th and March 31st.

The tournament is played on two football pitches with the size 60×40 meters. The goals are 2 meters high and 5 meters long. Each team consists of 7 on-field players. The coaches can make unlimited substitutions throughout the game. One match has two halves, each 20 minutes.

The winners of both groups play for the first place, the second placed – for the third, etc.

Beroe’s first game is on March 29 at 9:30 against Vitoria. Later the same day, from 16:30 hours coach Sider Dimitrov’s boys are playing against Arudense. The last group match is against Salvaterense on the next day at 10 o’clock. The final matches are on the last day.

Patron of the tournament is former Vitoria (Setubal) player Sandro Mendes. He was born on February 4, 1977 in in Pinal Novo (Portugal). As a youth player he was part of Pelezinos and Vitoria (Setubal). He also played for Herkules, Villareal and Salamanka. From 2000 to 2005 he was player of Vitoria (Setubal) and after that was transferred to Porto. From there he was loaned to Manisaspor (Turkey). At the end of the season he returned to Vitoria. In 2010/2011 he played for spanish side Seuta and in the last season ad player he was defending the colors of Naval. After his retirement from football he started his career in the youth academy of Vitoria.

On March 30 at 16 o’clock all teams will be visiting the Superleague match of Portugal between Vitoria and Maritimo. 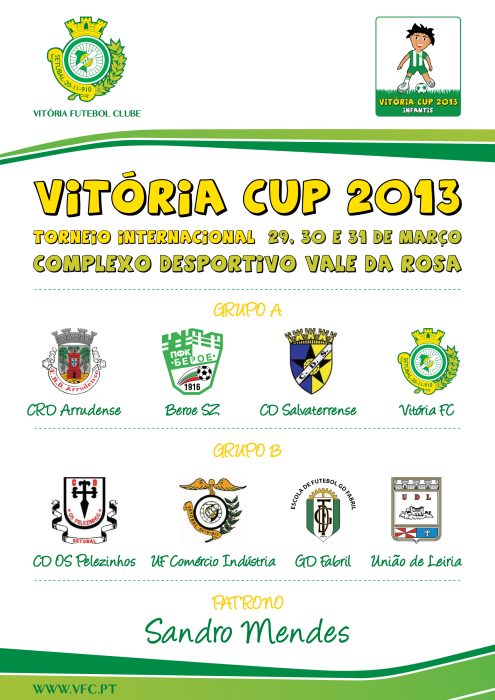