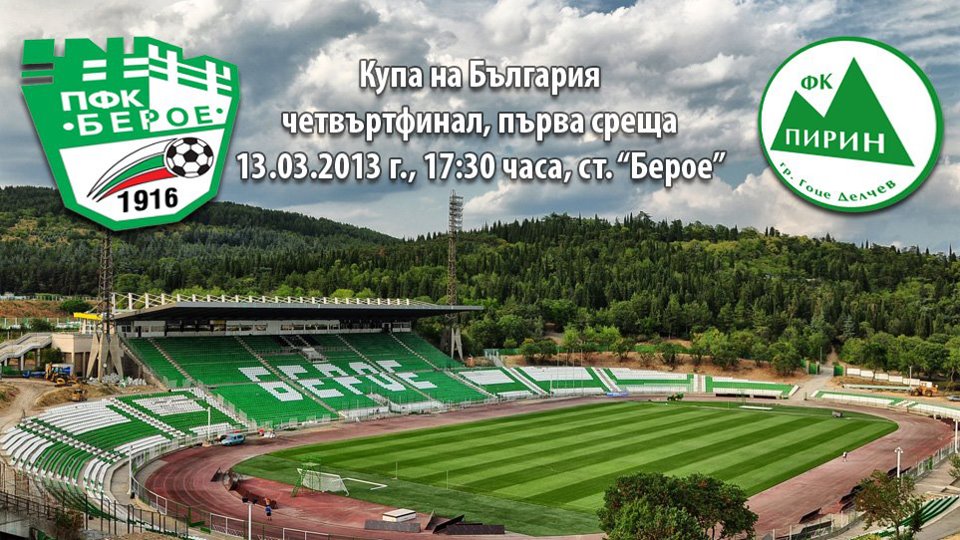 At 17:30 hours tomorrow Beroe plays against Pirin (Gotse Delchev) in the first leg of the quarterfinals of the cup. Beroe will not be able to count on David Caiado, Pedro Eugenio, Ignat Dishliev and Emil Angelov because of injuries. Lyubomir Vitanov is missing the game for Pirin because of a suspension. Referee is Nikolay Yordanov from Sofia.

The game will be broadcast live by beroe.bg.

In the autumn the two teams played against each other in Stara Zagora and Beroe was defeated with 2:3 at home.

In the cup Beroe won two times against Akademik (Svishtov) and Lokomotiv (Mezdra). The guests from Pirin defeated Montana and Neftohimik.

One day ahead of the game the assistent Levon Apkaryan and the defender Zdravko Iliev assured that the team has one goal – to win against Pirin.

„Important game, but the team is ready“, told Apkaryan.

Nikolay Yordanov from Sofia will be refereeing the game. His assistants will be Veselin Mishev and Valentin Dobrev. Fourth official is Nikolay Valchev from Lovech.